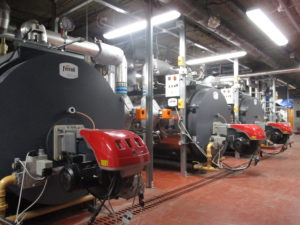 In terms of energy savings, adjusted for degree days, the council has made an average gas saving of 30%. Comparing 2015/16 to 2012/13 before the project was completed, the weather corrected saving is 1,297,544kWh, equating to a cost saving of £29,200 which puts the council on course for recouping the cost of the project within seven years.

The old 2MW medium temperature steel boilers were installed during the construction of the Civic Centre building in the early 1970s and had come to the end of their life. Of the three original boilers only two were still operating but were corroded with the burners in poor condition and energy efficiency levels well below today’s expected standards.

Portsmouth City Council’s mechanical engineering team, which manages all engineering projects entirely in-house, invited Ferroli to quote, along with other suppliers, to replace the system. After comparing the merits of each of the tenders based on quality and price they found a considerable difference in favour of Ferroli and so Ferroli was chosen for the project.

Boiler retrofit projects always come with challenges but with this project those challenges turned into valuable opportunities to make even more energy savings than had been envisaged.

Changing the valves presented a new challenge because moving away from the original specification would take the boilers out of scope and therefore invalidate the specialist insurance requirements; however, Ferroli’s engineering design team, working in conjunction with the council’s design team, made modifications to the boilers to bring them back into scope with the result that the project was soon back on course, avoiding costly delays.

To rectify the problem it was necessary to carry out a heat loss calculation of the whole building. This gave the council team the opportunity to take a fresh look at the whole building management system. By identifying the areas where waste and inefficiencies were occurring they were able to change the dynamic of the building, thereby reducing head pressure and at the same time make considerable energy savings.

The logistics of removing the old boilers and installing the new Ferroli boilers through the building basement was always going to be challenging. It was important to keep disruption to the vicinity to an absolute minimum, and fortunately close co-ordination between the installation contractors Corrigenda Group, maintenance engineers Churches and Ferroli meant that the process went smoothly, with the result that the boilers were installed without difficulty.

Modernising heating systems within a building of this age was always going to be a challenge for the council’s engineering and energy teams, but the direct working relationship with boiler manufacturer Ferroli meant that all questions and issues were swiftly resolved and the timescale of the project was kept to a minimum.