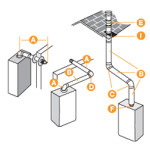 One of the many innovative features of the Modena HE boiler that make it so popular with installers is the versatile  flue  kit. Unlike other boilers of this type and class which come with a standard flue, the Modena offers an  extensive  range of flueing options, including twin pipe with a very long reach of up to 80m.*

Thanks to the 80mm twin pipe system, the Modena boiler can be installed almost anywhere in the property,  a  claim that not many boiler manufacturers can make. This flue allows for a reach of 80m* for the 27kW combi  and  70m* for the 32kw combi and all the system models.  The 80mm flue pipe is also translucent which allows  the installer to check that the condense is running away and not ‘pooling’ in the flue.

The Modena comes with a standard telescopic flue kit which can be adapted by purchasing both horizontal and vertical coaxial flue extensions as required for the chosen location within the property.

A centralised flue position on the boiler makes replacement installations in older properties much easier by being able to use the same flue hole through the wall.

There are many different classifications of flues and it’s very important that the regulations relating to positioning are adhered to for safety’s sake. The extensive options offered by the Modena means it is more adaptable than any other comparable boiler.