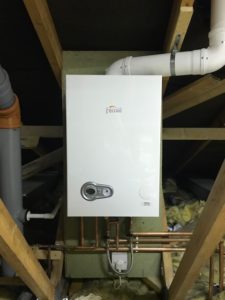 The Salvation Army in South Wales has put its faith in the Ferroli Modena HE boiler once again with a fifth install, this time at the South & Mid Wales Divisional Headquarters in Cardiff – and saved a considerable amount of money in the process.

The new 32c combi boiler installed by Jason Williams of Will Heat replaced an older Modena boiler model that Jason fitted for them 15 years ago, which had given them great service over this time but now needed upgrading.

“This is a perfect example of how charities like the Salvation Army can save a lot of money on something as unavoidable as a boiler upgrade,” said Jason. “A well known gas supplier had quoted them £4,500 for a new condensing boiler but by continuing with the Ferroli brand they were able to bring the job in for a third of the cost – and that included a 7 year warranty.”

“The Salvation Army has put their trust in the Ferroli brand because of the performance, reliability, energy efficiency and value for money of their boilers,” said Jason. “There’s no need to pay over the odds for a big brand name when you can get a best buy boiler like the Modena.”